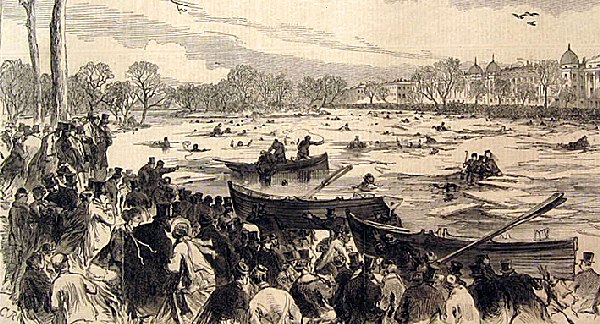 The aftermath of the tradegy. Print Illustrated London News PD

The sad story of a tragic accident in Regents Park.

In 1867 Regents Park in London encompassed a zoo, a range of gardens, avenues for riding, and an ornamental lake with an area for boating. In very cold winters when the lake froze over it became a popular venue for skaters.

The beginning of January 1867 was intensely cold throughout Britain and skaters everywhere enjoyed themselves on the frozen lakes and rivers.

In Regents Park on the day of the 14th, The Times newspaper reported that during the day, hundreds of people had been skating on the lake. During the afternoon, the Skating Club members acting as stewards known as 'icemen' had to rescue 21 people who had fallen in after the ice cracked. One person was recovered unconscious, but was revived a few minutes later.

This did not deter the skaters who returned in their hundreds the following day on the 15th. That afternoon it was widely estimated that between 150 and 300 were skating on the ice. Accounts differ on what exactly happened and whether there was advance warning that the ice was unstable and about to break, but the ice began cracking and then broke into fragments. The skaters began to tumble into the water which was at least 12 feet deep.

Icemen, skating club members, park keepers and spectators struggled to rescue the victims, but it was clear that a great tragedy was unfolding. Many skaters plunged to the bottom of the lake as their skates prevented them from swimming, while others clung onto the ice, screaming for help. Spectators likewise called out and pleaded for assistance to save their loved ones.

Many acts of individual heroism took place as many skaters were saved from drowning. Police and doctors living nearby dashed to the lake, and the rescued were taken off to their homes, hospital, or nearby workhouses. But then came the task of recovery and identification of the bodies which took several days.

At the inquest, evidence was heard into the sad deaths of 40 people, mainly young men, and some women and children.

To prevent any further repeat of the tragedy, the lake was drained, the mud removed and replaced with soil. The water level would now be 4 feet deep.