Who were the original Hooligans? 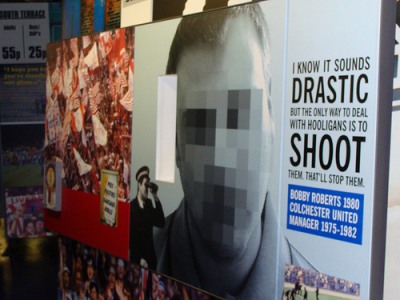 When street roughs made a name for themselves.

The name Hooligan is now used to describe a person, more often than not a youth, who takes part in destructive, unruly and anti-social behaviour. The original meaning meant a young ruffian who was a member of a street gang (Oxford English Dictionary, 'OED').

But who were the original Hooligans? Hooligan is an Irish surname. As to how it came to used in its present meaning the OED has no clear evidence. It provides citations from 1898 that Hooligan referred to a gang of youths in the South London area, but it cannot find citations to support other suggestions that the name was a corruption of Hooley or Hooley's gang; or references from a music hall song about a rowdy Irish family, or came from a Patrick Hoolihan or Hooligan as claimed by Clarence Rook in 1899 [5].

Here at History House we thought we would do some more research and have found a slightly earlier reference to Hooligans.

London newspapers in April and May 1894 carried reports of a case at Southwark Police Court in South London where it was said that Charles Clarke, aged 19, was charged with assault on police, was:

The gang had attended a music hall and created a disturbance which resulted in the Police being called and the gang's arrest. At the later remand hearing a newspaper repeated that allegation, but referred to the "O'Hooligan Boys". [2]

The next month, two other youths were brought before Lambeth Police Court for threatening behaviour. They were described as members of the gang known as "the Hooligan Boys". [3]

The problem of gangs of youths in the Lambeth area appears to have been a big problem for in October 1894 the Illustrated Police News reported that local tradesmen were organising a deputation to send to the Home Secretary as police needed support in "their efforts to stamp-out the so-called 'hooligan' gangs of roughs". [4]

Reference to the hooligans then dropped from the newspapers until April 1898 when Henry Mappin as murdered in Lambeth. A member of the Hooligan gang was charged with his murder.

There was considerable publicity concerning this case with headlines such as 'Reign of terror in Lambeth' and 'Dreadful state of things in south Lambeth'.

Within a short time, whatever the area of London, newspapers switched from using their normal phrase 'gang of ruffians' to the more sensational a 'hooligan gang' or 'gang of hooligans'. One defence solicitor representing his client in Lambeth court on an assault charge was reported to say "that everybody who got into a row in that district was now called a Hooligan". [5]

The word, and its derivative, Hooliganism, was now fixed in the English language.

For other speculation on its origin see A Dictionary of Slang and Unconventional English By Eric Partridge, Paul Beale. It is interesting to note that despite Patrick Hooligan's alleged notoriety, his name fails to appear in any of the British Library's 19th century newspaper collection.

Some of these can be read on the British Newspaper Archive