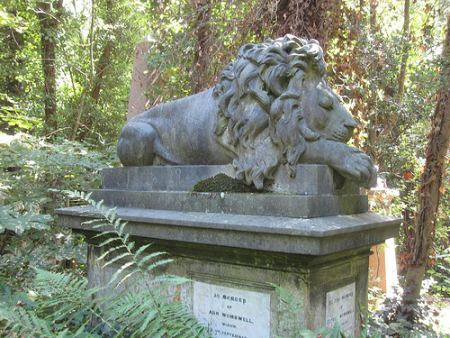 The resting place of many notable Victorians.

Highgate Cemetery is in Highgate, north London. When it was opened in 1839 the population of London was expanding rapidly and church yards were either full or quickly filling up. Highgate Cemetery was one of number of new private cemeteries approved of by Act of Parliament. It was designed to cater for the wealthy middle classes of London.

Once it was landscaped, and chapels and vaults added, it became the burial place of many famous people who lived in London. The cemetery became so successful that an extension was added.

An early advertisement for the cemetery:

HIGHGATE CEMETERY, or the LONDON CEMETERY COMPANY'S NORTH LONDON, consecrated and established by Act of Parliament, is two miles from Glocestergate, Regent's-park, three from King's-cross; to avoid Hlghgate hill, go through Kentish-town.
There are extensive and durable Catacombs. The grounds present secure, peculiarly elevated, dry, and admirable spots tor vaults, monuments, and graves. There Is Ground tor dissenters, many are Interred, and Funerals may take place daily.
The burial register is kept under the lock of two directors. Kentish Town Omnibuses close to the Cemetery - the Holloway within a mile. Office. No.22. Moorgate-street, back of Bank.
Morning Advertiser - Monday 14 October 1839 on the British Newspaper Archive.

A visit today would reveal the Victorian way of death with elaborate mausoleums, tombs with carved figures, and inscribed gravestones.

The names of the occupants of the cemetery reads like a Who's Who of Victorian and Edwardian society. These are just a few of them: 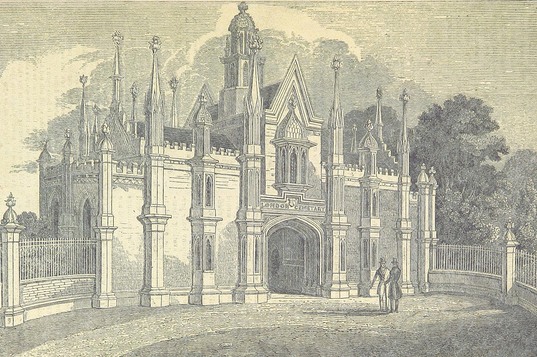 Many parts of the cemetery are now overgrown, but the ivy creeping over the graves makes it very atmospheric and a popular subject for photographers.

Information on visiting the cemetery can be found on the website, The Friends of Highgate Cemetery.

The cemetery has been photographed extensively by English Heritage.