Which English King was shot in the face with an arrow when he was sixteen? 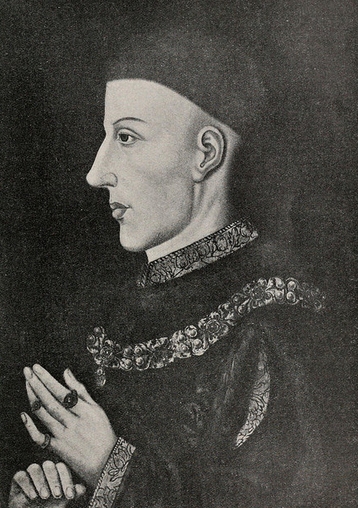 Henry V, King of England, victor of the Battle of Agincourt and hero of a Shakespeare play, would have died at the age of 16 if it were not for the skill of his surgeon in removing an arrow shot in his face during battle.

Prince Henry was born in 1386, son of Henry of Bolingbroke who in 1399 became King Henry IV. Henry IV ruled a troubled kingdom and his hold on the crown was insecure. He spent much of his reign dealing with rebellions, plots and assassination attempts.

Young Henry, meanwhile, undertook the education of a future monarch which included armed combat with sword, lance, axe and dagger, and he learnt the theory of the art of warfare.

At the early age of 16 he was called upon to use those skills for the first time in battle. In 1403 Henry IV was faced with rebellion in the principality of Wales. Led by Sir Henry Percy of Northumberland and Owain Glyndwr of Glyndyfrdwy, the rebel army of 4000 men marched towards Chester and then onto Shrewsbury.

The King responded by meeting them in battle at Shrewsbury with his own army of 5000 men. Young Henry as Prince of Wales led his own contingent against the rebels, and in particular the archers from Cheshire.

As they climbed up the hill towards the rebels, in a foretaste of what was to happen later at Agincourt, the archers let loose a hail of arrows. As a writer later put it "so fast and thick that it seemed to the beholders like a thick cloud, for the sun, which at that time was bright and clear then lost its brightness so thick were the arrows". [1]

Prince Henry was hit with an arrow on the right side of his face just below the eye. With the arrow deeply embedded in his face, Prince Henry remained on the field of battle until the evening by which time the rebels were defeated and the leaders dead or captured.

After the battle the shaft was successfully removed, but the medieval doctors now had to decide how to remove the arrowhead which was imbedded in the skull "at a depth of six inches". If it was untouched it would surely result in death from infection. Suggestions for its removal included potions or other cures, or forcing the arrow through to the other side.

Finally, John Bradmore, a London surgeon, was called upon. He gradually enlarged the wound with small probes, enough to allow the arrow to be drawn out. Then with a specially made pair of tongs and a small screw running through the tongs and into the socket of the arrow, he wiggled and pulled the arrow head out. One must remember that this was before the days of pain relief and anesthesia. The pain endured by Prince Henry must have been terrible. The wound was cleaned out with white wine, and wads of flax soaked in bread sops, barley honey and turpentine oil.

Prince Henry recovered fully, but was left with a large scar, which is probably why the only remaining contemporary portrait of him shows only the left side of his face.