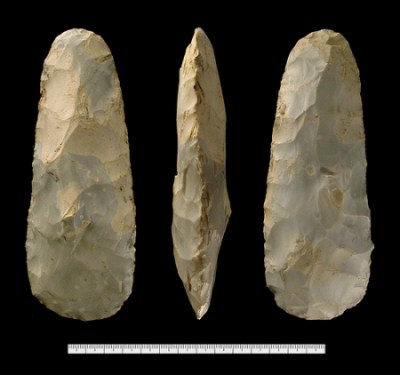 Grimes Graves is the name given to the area of ancient flint mines found near Thetford, Norfolk, England.

Covering an area of over 90 acres, the land is pot-marked, rather like a lunar landscape, with grassy mounds and craters. These craters are the remains of 433 in-filled shafts, pits and spoil heaps from diggings made 5000 years ago to extract flint. The earliest diggings are from .c3000BC. The craters clearly show on a satellite image on Google Maps.

Flint is a hard stone which early man discovered could be shaped or knapped into axes, knives, arrow heads, scrapers and many other tools. The workings at Grimes Graves commenced at a time when metal technology was still in its infancy and flints were still needed for everyday use. 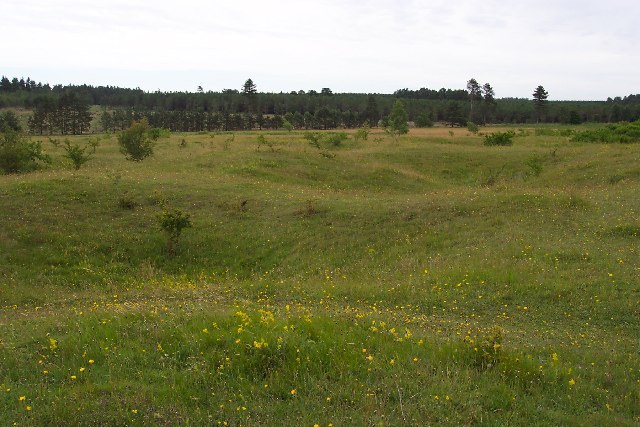 The pot-marked lndscape.
© Copyright Ron Strutt contributor to the Geograph Project and licensed for reuse under this Creative Commons Licence

Many of the shafts are as deep as 12 meters, which is astounding considering that the early mines were dug out with red-deer antlers adapted to be used as picks or levers. Occasionally an ox-bone would be used as a pick-axe, or a stone axe employed to hack at the chalk. The miners were aiming for the layer of hard black flint layer which is known as floorstone. Once that was struck then horizontal galleries and tunnels were dug following the flint layer.

The site is now managed by English Heritage and is a Site of Special Scientific Interest. Twenty pits have been examined by archaeologists and one pit, 9 meters deep, is now open to the public.

Why are they called Grimes Graves? This is a corruption of the name given to them by the Anglo Saxons. They thought the pits were the work of Grim, also known as Woden, a god.