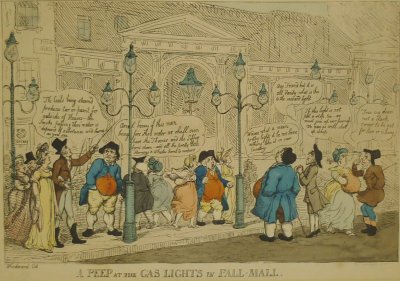 Lighting the dark streets of London.

The use of gas for light was first demonstrated by William Murdock who lit his home and workshop in Redruth, Cornwall, England, in 1792. Soon after he became the manager of Boulton and Watt's steam engine works in Soho, Birmingham, where he erected an apparatus which lit the building by gas. He later installed similar apparatus in cotton mills in Lancashire in the north of England.

Meanwhile, others were also experimenting with gas to light buildings. Frederic Albert Winsor, 1763 - 1830, a German, came to London armed with knowledge of a patent for piping gas made by a Frenchman, Philip Lebon.

Despite the lack of any great knowledge of chemistry or engineering, Winsor proclaimed himself as an authority on gas and carried out a number of experiments with aim of finding investors to finance his ultimate aim of lighting the streets of London.

In 1803 he gave a demonstration of lighting the Lyceum Theatre in the Strand with gas, and in 1807 he took up occupancy of two houses in Pall Mall. There he carried out more public demonstrations and experiments.

In the same year, as part of plan to enlist royal patronage approval of his plan, during celebrations of the King's birthday he placed gas lights along the walls of Carlton Palace Gardens between the Mall and St. James's Park with the gas being supplied by the furnaces inside his house on Pall Mall.

Winsor and his supporters wished to persuade Parliament to approve a charter to incorporate a national gas company, and as part of this campaign in 1807 Winsor erected 13 lamp-posts in Pall Mall fed by a pipe buried under the pavement from his house. The lights stretched from St James's to Cockspur Street and when lit, observers noted their light had "much superior brilliancy" [1]. This was the first time that a street had been lit by gas. The lights were lit on several occasions during the next couple of years as he continued trying to obtain the support of Parliament.

Many derided his plans to light the streets with gas lights. It was said his projected profits did not add up, and on the practical side, Sir Humphrey Davy, the famous scientist, remarked that 'it would be as easy to bring down a bit of the moon to light London as to succeed in doing it with gas', and it is said as an additional sneer, he asked whether the dome of St Pauls was to be used as a gasometer to store the gas.

Parliament did not approve the national company, however, and after many setbacks Winsor and his associates managed to obtain a Royal Charter for their Gas Light and Coke Company to supply gas in the cities of London and Westminster and the borough of Southwark for 21 years. 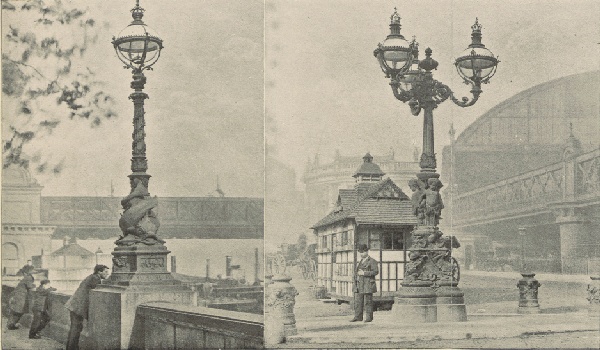 Street lighting in London c.1873.
Image from 'A Comprehensive Scheme for Street Improvements in London, accompanied by maps and sketches', courtesy of British Library on Flickr NKCR

Gas began to flow through the London streets in 1813 and soon many other companies were jostling for permission to lay their own gas pipes.

Even then not everyone was in support of the new technology and in 1813 one gas producer was prosecuted for "the making of gaslight, and making and causing to be made divers large fires of coal and other things," by reason whereof and "divers noisome and offensive stinks and smells and vapours he causes the houses and dwellings near to be unhealthy." [2]

Winsor meanwhile fell into financial difficulties and was removed from the board of the company. He went to France where he died in 1830. Before he died, gas had become widely used for lighting in many European cities.