The first General Assembly of the United Nations 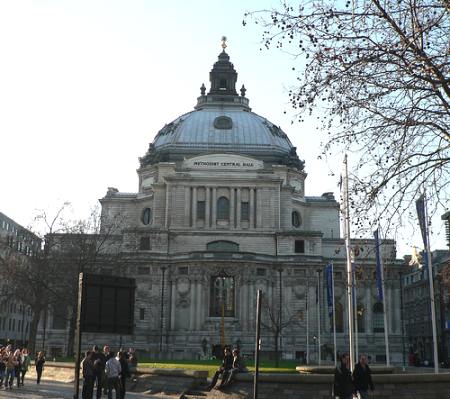 The historic first General Assembly was held in London.

The venue for this historic event was a Methodist church. Its full title is the Methodist Central Hall and is located just across the road from the Houses of Parliament, Westminster Abbey, and the Foreign and Commonwealth Office, and a short distance from Downing Street.

The hall was built in 1912 to commemorate the death of John Wesley, the founder of Methodism. Finance for the building of the hall was raised by the Wesleyan Methodist Twentieth Century Fund which started in 1898 with the aim of raising a million guineas to fund the promotion of Methodism. By 1904 the fund had achieved its target. One quarter of the money raised went towards building the hall.

It was intended that the hall would not only serve as a church, but also as the venue of conferences and lectures on "religious, educational, scientific, philanthropic and social questions".

The architecture of the building, in line with the philosophy of the Methodist movement, does not appear like a church. There is no cross, stained glass, or other religious symbols on the outside, and under the dome, the impressive Great Hall with seating for up to 2,352 people, is designed for preaching and oration.

It is here in the Great Hall that the UN delegates sat. The hall was specially decorated in blue and gold, and flags of all the participating nations lining the walls. The large organ and choir seating at one end of the hall was screened with a deep blue pleated curtain, the UN symbol, and some of the seating removed or reupholstered.

In 1951, the United Nations opened its headquarters in New York City and a permanent home was found for meetings of the General Assembly.