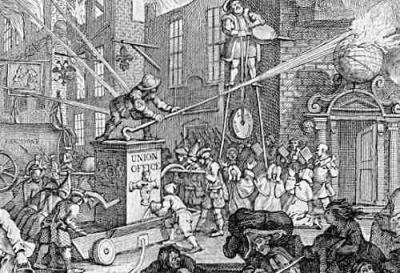 An insurance company's fire brigade (from a Hogarth print 1763 PD)

A look at the history of Fire Marks.

As the Great Fire of London consumed the buildings, almshouses, schools and churches of the City of London in 1666, property owners watched their buildings and livelihoods go up in flames, each knowing that they had lost everything because fire insurance did not exist.

Immediately after the fire, rebuilding and reconstruction of the City started. One man involved in the rebuilding and property development was a Nicholas Barbon. In 1667 he established a mutual society called "The Fire Office" which offered fire insurance. This later became known as Phoenix Fire Office. An appropriate name for the society as the Phoenix is a mythical bird which burns itself and then arises from the ashes reborn.

In 1682 it was recorded that for 30 shillings the company would insure a property for £100 for a period of 7 years. The company employed its own firemen complete with liveries and unique badges. [1]

The Phoenix Fire Office was the first of several fire insurance companies formed after the fire. Others included the Friendly Society (1683), Hand-in-Hand (1696) Sun Fire Office (1710) and Royal Exchange Assurance (1720) [2].

To identify that a property was covered by fire insurance, attached to the building at a height easily seen from the street but out of reach of thieves, was a sign or emblem called a fire mark which was issued by the company. Each company had its own distinctive design which made identification of the property easier for their fire fighters and the company representatives. At first they were made of lead with the individual policy number stamped upon them and a type of logo.

Designs included, for Sun Fire Office: a large sun with a face; the Royal Exchange Assurance: their building; and Phoenix: obviously Phoenix rising from the ashes. 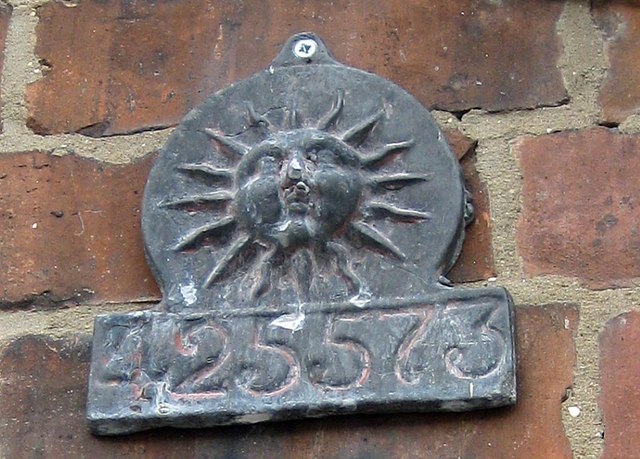 Fire mark of the Sun Fire Office.
© Copyright Pauline E contributor to the Geograph Project and licensed for reuse under this Creative Commons Licence

Later fire marks were made of tin, copper, or similar material. These are more often called fire plates. They were more an advertising medium as most do not have a policy number stamped upon them.

These fire marks are now rarely to be seen on buildings. Those surviving the passage of time are now collectors items and they often appear in auctions or on .

As mentioned above, each company organised its own fire brigade to protect its buildings; at first they were volunteers who had their own jobs, but soon the insurers recruited permanent firemen. By the early 19th century, London insurance companies banded their fire brigades together and this was the first step to the fire brigade being taken over by local government.

Fire insurance and fire marks were soon taken up in the provinces, and the idea was also exported to the American colonies and Europe.

[1] Notes and Queries by William White
[2] The constitution and finance of English, Scottish and Irish joint-stock companies