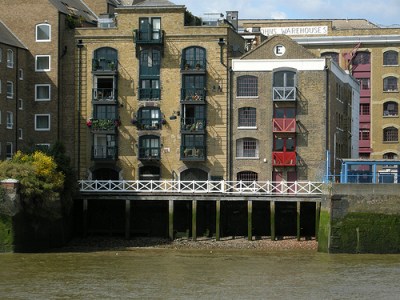 Paying the price for murder and piracy on the high seas.

Under the English legal system the Admiralty Court dealt with all crimes committed on the high seas. For at least 500 years Execution Dock was where its capital sentences were carried out.

To ensure that it was within the court's jurisdiction, the gallows were located at below the high-water mark on the River Thames in London.

It also served as a visible reminder to passing ship's crews, for the bodies were left for three days, visible or immersed as the tide rose and fell. Some were then transferred and placed in an iron cage and hung in chains at Bugsby's Hole at Blackwall.

One of the most famous pirates, Captain Kidd, was hung at Execution Dock, while other pirates included some of Blackbeard's crew.

In later centuries the bodies where not left, but would be taken down and taken away for dissection by surgeons.

The last execution took place in 1830 when George John Davis and William Watts became the last men to executed for piracy in Britain.

The exact location of the gallows is disputed, but some sources state that it was opposite the former warehouse shown in the picture above. Note the letter 'E'.

Google Maps link for the approximate location of Execution Dock.