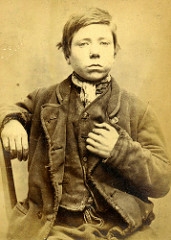 What to do with a Victorian child criminal? James Darley aged 16 in c.1871. In prison in Tyne and Wear for theft of shirts.
Image courtesy of Tyne and Wear Archives on Flickr. NKCR

A Victorian way of dealing with juvenile crime.

The Essex Reformatory School for Boys was located at Harlow Tye in the parish of Harlow.

It was seen by some Victorians as a possible solution to juvenile crime. Opened and certified by the Home Office in December 1856 [1], its aim was to deal with the 'wild young criminals of the county'. Boys convicted of crime could be sent direct to the reformatory, or after they had served their sentence they would then be sent to the school.

The school was a former farm house and 40 acres of land. In the school boys were subject to discipline and hard work - both in the classroom and on the fields.

Until its closure in 1879 it was reported that 212 boys [2] passed through its doors. It closed because boys were being sent to the new Industrial Schools instead and therefore the school was running at a loss.

Below is a report on the Reformatory School from the Essex Almanac for 1865.

This Institution is in the parish of Harlow, but a distance from the town, in the neighbourhood of Moor Hall, the seat of J Perry Watlington, Esq., MP, who is chairman of the Board of Managers, and the chief mover in the opening of this retreat, where the wild young criminals of the county, when caught by the law, may be tamed and trained by religious and industrial discipline into good citizens.

A meeting of the gentlemen of the county was held in 1855 for the purpose of establishing the school, and a subscription was entered into for that object. The Institution was opened in the year following.

It has thus been in operation eight years; and it must be added, in justice to its philanthropic founders, that it has made a visible impression upon juvenile crime in the county, as the calendar and commitments testify.

The nature of the school would not be perceived by a casual passer by. There is nothing of the character of a gaol about it. 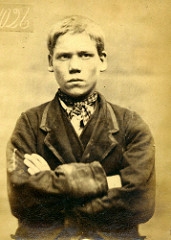 John Reed aged 15 in c.1873. In prison and then reformatory school in Tyne and Wear for theft.
Image courtesy of Tyne and Wear Archives on Flickr. NKCR

The house itself is of red brick, surrounded by a well-kept garden, inclosed with low palings. Thorough cleanliness and order reign within. There are upon the ground floor a kitchen and a laboratory. and a day, dining, and school room for the boys. Above the mantelpiece of the latter is a respect board, on which the names of the most worthy and well-conducted are inscribed as a mark of honor, and an encouragement to others - the system of government being based more upon a desire to train and strengthen the good qualities of the boys than upon terror, though, of course, punishments are at times necessary, and a dark cell is provided for the refractory

The apartments of Mr Chaplin, the superintendent, and of the matron, are so provided that an observant eye can at any moment be brought speedily upon their charge. The sleeping room for the boys is a large and light apartment, rows of narrow iron bedsteads running down each side, ready means of surveillance being also here provided.

There are 40 acres of land attached, and the boys, allowing them due time for school and other duties, are employed in its cultivation, thus assisting in their own support, as well as being properly trained for labor in after life.

The number of boys in the school in January, 1861, was 24. From its foundation it has received 68, several of whom have been placed in situations in the colonies. The income of the school, derived from annual subscriptions, is about £70, and last year its farm account yielded £202 9s 4d.