Find your Essex ancestors on eBay 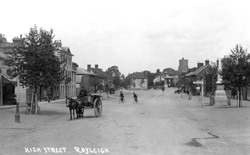 Details of items relating to family history on sale on eBay.

. Photographs, copies of Wills, house conveyancing, bills of sale, and much, much more.

Sadly many of these items are listed for just two or three weeks and then disappear into private collections. This page contains details of many auction lots which have appeared on Ebay and which may be of help to family historians. Unfortunately, for copyright reasons I cannot paste a copy of the image. The details below appear in the description of the auction lot or in the provided image. It may or may not be accurate. Each entry below is linked to the auction lot, but this will only work while the item is currently on sale.

Once the item is sold, it is not possible to identify where the item has gone. But it is hoped that the details below are better than nothing. They may give clues as to where to search next. Perhaps the Essex Record Office in manorial documents, etc. I cannot help you any further as to how they can be tracked down and purchased.

Charles St. John Barnett of Ongar - letter re will
Letter concerning the Will of Lieut. Col. Charles St. John Burren Barnett of Great Colmans of Chipping Ongar dated 23rd July 1910. He refers to his brother Herbert's son who had recently been murdered by the 'Kaffirs'. He had been left out of his Will.

Mistley - sale of properties
Sale catalogue for August 1901 for two detached properties called 'Sunny Side' and 'Albury Villa' in Mistley.

Will - Mary Loggon
Will of Mary Loggon (widow) of Barkway, Hertford dated 1785. She formerly lived in Lawford, Essex and was married to the Reverend George Loggon, the rector Lawford in 1778/9.

Estate or premises in Bulphan, Essex
Legal document dated 1851 in which Sarah Silsbey Lloyd the wife of John Lloyd declares having no interest in an estate or premises in the parish of Bulphan. Also mentions William Farren Stevens (no other information about him).

Property at Sewardston, Essex
1884 Vellum indenture for property known as No.6 Sewardstone, Essex, plus a map/plan and seals. Persons Involved: Thomas Mann, James Crossman, Henry Winks. Indenture is a lease for the above property. Whereby Winks is leasing the property from Mann and Crossman. Details about the persons involved are given including their occupation along with the amount of monies exchanged. Extensive details about the property are provided in including measurements, location and boundaries.