Could a hanged criminal cure cysts and warts? 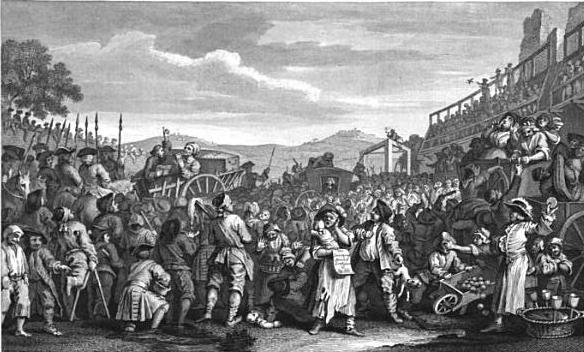 William Hogarth print, execution at Tyburn of the Idle Apprentice.
Image courtesy of University of California Libraries on Flickr. NKCR

When sufferers of a medical ailment would flock to public executions.

Before medical science established the cause and cure of cysts and warts there was considerable folklore and superstition surrounding them. There were scores of supposed cures, many quite bizarre to our modern eyes.

One belief was that if warts and cysts, or wens as the cysts were called, were rubbed by the hand of a recently executed person, they would disappear. It was a belief in 'transference', as if they would taken away by the deceased. In some areas it was known as the "dead stroke" or "rubbing the wen". In some parts of the country the belief extended to any recently deceased person.

Public hangings attracted many wen sufferers who had the intention of rushing up to the body immediately after their death on the scaffold and to rub the hands of the deceased over their wens. Women would even bring their children along to this ghastly event in an attempt to have them cured. Some hangmen saw this as a potential way to make money and charged a fee for the touching.

In 1767 the Gentlemans' Magazine reported that Francis Gorman was executed for the murder of Thomas Griffiths and that "a young woman, with a wen upon her neck, was lifted up while he was hanging, and had the wen rubbed with the dead man's hand, from a superstitious notion that it would effect a cure."

In 1777 a newspaper reported, "After he [Dr Dodd] had hung about ten minutes, a very decently dressed young woman went up to the gallows, in order to have a wen in her face stroked by the Doctor's hand; it being a received opinion among the vulgar that it is certain cure for such a disorder. The executioner, having untied the doctor's hand, stroked the part affected several times therewith". Quoted in Observations on the popular antiquities of Great Britain.

The Times reported an execution on 26 August 1819 at Maidstone, Kent, when a Jew, Abraham Abrahams, was executed for murder. Several people "applied for permission to rub the hand of the deceased over their wens, which by the vulgar is stupidly believed to be a cure for those troublesome swellings, but the Jews in attendance told them they could not suffer the body to be touched but by their own people contrary to their customs."

One convicted person tried to request that no rubbing of hands should occur after his death. There is nothing to say whether his request was complied with. "While on the scaffold, Binstead, in conversation with the Rev. Mr. Cotton (the ordinary of Newgate) requested that his hands might not be applied to persons who came to be rubbed for the wen". Sussex Archaeological Collections, vol.45, p.215 recorded at The National Archives.

One account of the practice written when it was still fresh in the memories of some who underwent the touching, suggests that it became less common at executions because of the high fees demanded by the hangman. In any event, it stopped when the decision was made in 1868 to no longer hold public executions. Touching any other recently dead person to cure wens, however, did continue into the 20th century.