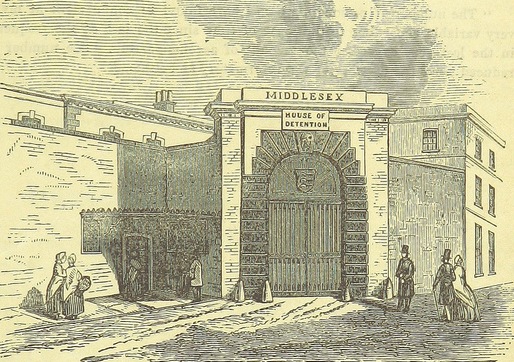 Entrance to the House of Detention, Clerkenwell.
Image from 'The History of Clerkenwell' by William Pinks. Courtesy of British Library on Flickr. NKCR

An unsuccessful prison escape in which twelve bystanders were killed.

In 1867 the Fenian movement in Ireland were seeking the establishment of an independent Irish Republic. To these ends the Irish Republican Brotherhood carried out a poorly organised rebellion in Ireland supported by raids from America into Canada, and planned attacks in Britain.

One of the Fenian supporters was Ricard O'Sullivan Burke, born in Kenneigh, Ireland, who had travelled to the Americas and eventually served with the Union Army during the American Civil War. After the war he travelled to Ireland to give advice on military tactics and to take part in the rebellion. He was dubbed with the title of 'Colonel'.

He then travelled to Britain to purchase arms and help plan a rescue attempt of arrested Fenian supporters in Manchester in which a policeman was killed. He was later arrested and placed in Clerkenwell House of Detention, London, awaiting his trial.

A plan was hatched to release Burke and another Fenian prisoner while they were walking in the exercise yard. News of this was leaked to the police who confined the prisoners to their cells, which in view of the later events, saved their lives. 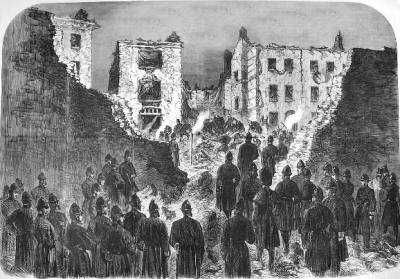 House of Detention, Clerkenwell, after the explosion. Print PD

On 13 December 1867, police, both uniform and plain-clothes, patrolled the outer walls of the prison, but they failed to stop a man pushing a large barrel near to the wall and igniting its contents which contained gunpowder. Far too much than required. The explosion knocked down nearby houses, shattered windows, and the thick outer wall of the prison collapsed with bricks and debris flung in all directions. Four people were immediately killed, eight died later of their wounds and at least another 120 injured, including many children. After the explosion the army were called out to assist in securing the prison perimeter.

At a trial at the Old Bailey, six people were charged with murder but only Michael Barrett was convicted and became the last person to be publicly hanged in Britain

Following the explosion there was strong anti-Irish feeling both in government and in the population in general, and the police were strongly criticised for failing to stop the atrocity.

More attacks occurred in the 1880s which included attacks on the Underground.