How Cleopatra's Needle was almost lost at sea 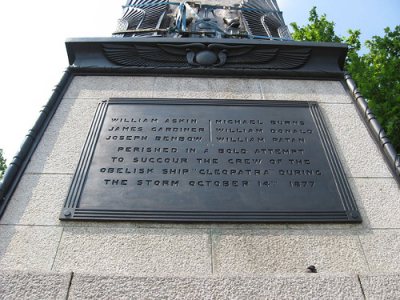 Plaque at the base of Cleopatra's Needle.
Image courtesy of Redvers on Flickr CC-BY

How the ancient obelisk nearly sank to the bottom of the ocean.

Cleopatra's Needle stands on the north bank of the River Thames on the Victoria Embankment, central London. It is an ancient Egyptian obelisk and one of a pair. The other one now stands in New York. The name Cleopatra is inappropriate as they were made hundreds of years before Cleopatra's reign.

The obelisks are made of red granite, 21 meters (68 ft) high and weigh 224 tons. They were erected c.1500BC in the city of Heliopolis. Hieroglyphs commemorating Thutmosis III and the victories of Ramesses II adorn the sides. They were later moved to Alexandria to the temple of Caesareum. At some time later, perhaps as the result of an earthquake, one toppled and was partially buried. This saved it from erosion and preserved many of the hieroglyphs.

During the removal of the French from Egypt by Nelson and Abercromby in 1801, great interest was shown by several army officers in the partly buried "Cleopatra's Needle, a long narrow square pillar ... about 70 feet high, one piece of granite."[1] Lord Cavan and a number of other officers raised a subscription to pay for shipping Cleopatra's Needle to Britain. A jetty was built, a ship prepared and the obelisk excavated, but work came to halt when sailors who had been assisting, were ordered not to do so. The plan was abandoned and the obelisk remained where it lay. [2]

In 1820 the obelisk was given as a gift to the George IV by Muhammad Ali Pasha of Egypt. [3] At the same time a much smaller obelisk had been shipped to Britain by Giovanni Belzoni and it was anticipated Cleopatra's Needle would soon follow. However, the cost and the practicalities behind the transportation of the obelisk prevented its move to Britain. 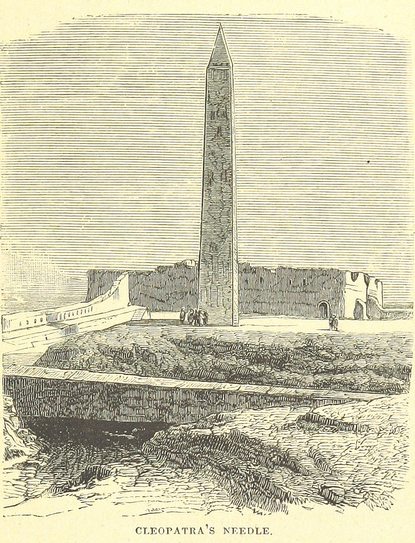 Alexandria, Egypt: the obelisk upon the ground eventually ended up in London.
Image from 'Popular History of Egypt' by John Watkins, courtesy of British Library on Flickr. NKCR

The question of the obelisk came up again in 1851, prompted by patriotic interest in the Great Exhibition, with demands for its recovery as souvenir hunters were now hacking pieces off it. Again cost reared its ugly head with the Government unwilling to put up the money. Puns about 'costly needlework' abounded in the newspapers.

In early 1877 with the agreement of the British and Egyptian Governments, Erasmus Wilson, F.R.S., the Professor of Dermatology in the Royal College of Surgeons, and very wealthy man, undertook to pay the whole cost of the recovery of the obelisk.

John Dixon and his brother Waynman, both a civil engineers, together with Benjamin Baker, another engineer, designed a craft in which the obelisk could be transported. It was to be enclosed in an iron cylinder containing nine water tight compartments. Inside, the obelisk would secured by wooden blocks. The craft would be fitted with keel, masts, sails, anchors, chain cables, and a pump. A crew of six men and a captain were required, and the whole craft could then be towed by a ship.

On 14 October she had reached the Bay of Biscay where she encountered a gale-force-8 storm. It lost its mast and Carter believed they were in danger of floundering. A boat was sent out from Olga to rescue the men, but it sank with the loss of the crew of six men. Another boat was successfully passed to Cleopatra by means of a rope and the crew rescued. The Olga abandoned Cleopatra to look for the missing boat's crew without success. When they retuned, Cleopatra had gone, believed lost.

Unbelievably, the Cleopatra was found a few days later by The Fitzmaurice bound for Valencia and it was towed into Ferrol, Spain. The problem then arose of salvage, and quite a novel problem it was for an obelisk had never featured before in a salvage claim. Meanwhile, as negotiations were ongoing, a decision had yet to be made for where the obelisk was to be sited in London when it did eventually arrive.

Finally, the salvage terms were agreed, and after refitting, on 15 January 1878, the paddle ship Anglia towed Cleopatra out of Ferrol and onto Britain with Captain Carter back on board. After an uneventful voyage she sailed up the Thames to East India Dock on 21 January. 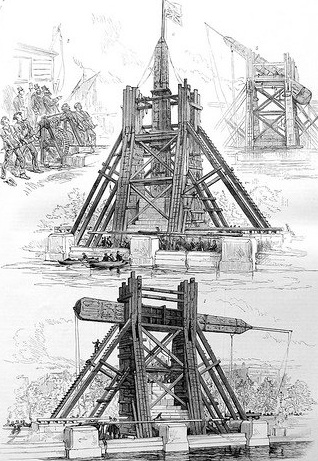 Turning the needle from horizontal to vertical and onto its base. Print PD

A decision was finally made for its final resting place and the obelisk was raised in its current position on 12 September 1878. At its base a 'time-capsule' of articles were laid including a bronze model of the obelisk, written accounts as to how it was transported, a portrait of Queen Victoria, bibles, Bradshaw's Railway Guide, cigars, toys, maps, and, rather curiously, "photographic likenesses of a dozen beautiful Englishwomen." [4] On the outside were placed two plaques, one to Erasmus Wilson, and the other to the men who lost their lives in the Bay.