Why did some Victorians object to the census? 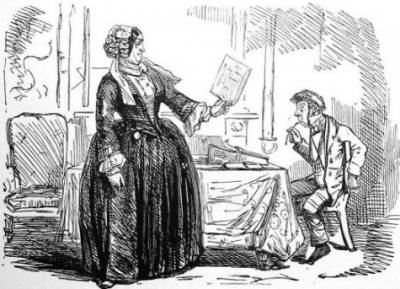 Rejection of the ten yearly census is not a new idea.

What were the objections to the census in 19th century Britain?

Names and other personal information were first required in the census of 1841. Refusal was punishable by a fine of £5 or 1 week's imprisonment. (For a detailed account of how the census was carried out 1841 - 1911, see this article on the census).

Accurate statistics on refusals and non-compliance are not available for the 19th century. However, a search through newspapers of the time reveal some examples of non-compliance.

All religious denominations agreed with the census and encouraged their congregations to co-operate. However, in 1841, one churchman, the Reverend William Black of Blaisdon, Gloucestershire, refused, writing on the form that he "considers it highly sinful to number the people. See the 24th chap. Of the 2d Book of Samuel, in the Holy Bible". He was fined £5.[2].

One person with very strong views was J. Morgan of Battersea. In 1891 he wrote on his census form, "Myself, my wife, and three children slept under the roof of this house on April 5. All the other questions are of an inquisitorial nature and I absolutely refuse to answer any of them, or allow anyone in my house to do so".

In the magistrates court he stuck to his guns saying the government had no right to inquire into a private life. He refused to pay his fine and was sentenced to a week's imprisonment.[3] Despite his strong stand, the details of him and his family were entered onto the census returns.[4]

Catherine Harvey, a lodging-house keeper, refused to give account of number of persons in her house. When asked for the census return she said "she would see the Government and the churchwardens d--d before she'd split." (slang. split: to inform). While Robert Clavering told the court that he "d--d the government for having legalised such inquisitorial proceeding".[5]

In Southampton, Mr Evans refused to supply his age saying "the enumerator had no right to ask the age of any one, or to come King Bomba over the public".[6] (King Bomba: a nickname given to Ferdinand II, said to have cruelly bombarded his own people.)

Some people were concerned about their privacy and certainly did want to leave their census form on the hall table awaiting collection by the enumerator where their "gossiping and chattering servants" could read it. Instead they posted the census form in a sealed envelope direct to the Registrar-General. They were not prosecuted for by-passing the system.

In 1871 Devon magistrates fined a man £1 for refusing to fill up the census paper for himself and child. "He said that he did not know his place of birth, and he would perjure himself by making a false entry." Quite why he could not place the words 'unknown' on the form is not clear.[7]

In 1911 one family felt annoyed by the census, but decided to obey the law with a little awkwardness. Two of the ladies listed theselves as suffragettes (this was crossed out by the authorities) as was their listing of their 'Tom Cat, Tobit Crackit' whom they listed as married with 16 children - presumably kittens. Occupations shown as 'mouse catcher, soloist & thief'. And the report that 'All the above mentioned have Breakfast, Dinner, Tea and Supper. Eat Standard bread Drink sterilized milk. Sleep with the windows open. Wash our street once a week, etc. God Save the King. RSVP'.[8] There is no report of any prosecution.

Finally, this particular case also never resulted in prosecution. The story may be partly from a newspaper reporter's imagination, but it still made me smile.

In Hulme, Manchester, the enumerator received a blank return.
"Why is it blank?", he demanded.
"Nobody slept in the house." replied the occupier.
"Was the house empty?"
"No, but my wife was confined of twins for the third time, about 10 o'clock, and nobody has ever slept since" [9]

The faults of the census which we complain about today were mentioned by one enumerator in 1880. They wrote a witty poem on the frustrations of their temporary job. You may find it interesting.