What was a Burial Clubs 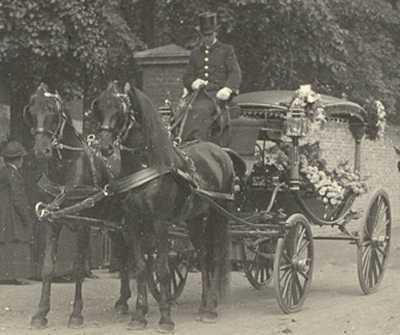 How your ancestors may have paid for their funeral.

Burial Clubs were to be found in 19th century Britain. This was a time of high death rates, especially among children, and poor working-class families were fearful that they would be unable to pay for a decent funeral for their loved ones and would have to rely on the local Poor Union to provide a pauper's funeral: buried in a common pauper's grave without a headstone. There could also be a danger that they would end up on an anatomy school's disecting table by virtue of the Anatomy Act (1832).

To help them, churches, trade unions, and other associations, formed benefit societies which they called Burial Clubs. The scheme was that weekly payments to the club would ensure the funeral expenses of the burial would be paid for, regardless of how long the person had been a member. The amount to be paid depended on the type of funeral desired and age of the person.

The Club would collect the money from members at their homes or a weekly collection day would be arranged at the local public house, or other type of venue once it was realised that the public house would be a temptation for those who would rather buy beer than save for their funeral. Other societies offered sickness payments which included provision for funeral expenses.

There was some suggestion that the system was abused in some areas. It was reported in an investigation of the time that some people, aware that a child was unwell and unlikely to survive long, would often enrol them in two or three clubs, and on the death of the child, each club paid out unaware of the other clubs. One man was even said to have put his child in nineteen clubs. When visiting a slum area, one clergyman's wife did not hear remarks of sympathy about a child's death, but was shocked to hear comments from the neighbours that "It's a fine thing for the mother, the child's in two clubs!" (1)

Costs of funerals shown in an undertaker's advertisement from 1846.
Image courtesy of the National Library of Scotland on Flickr. NKCR

There was also great fear and suspicion that there were even burial club murders: outright murder or neglect of a child so that it died. Many investigations were held, but these allegations may have been more the idea of over-excitable newspaper reporters and the concerned middle class rather than based on evidence.

The societies, which could contain as many as 5000 people, were not subject to any local or government supervision and many collapsed as a result of financial mismanagement and theft.

As well as burial clubs for the poor, many church or societies operated boot clubs, clothing clubs and coal clubs.

For more information on the Anatomy Act and an example of how paupers ended up on the dissecting table see this external article, A Pauper Dead-House: The Expansion of the Cambridge Anatomical Teaching School under the late-Victorian Poor Law, 1870-1914