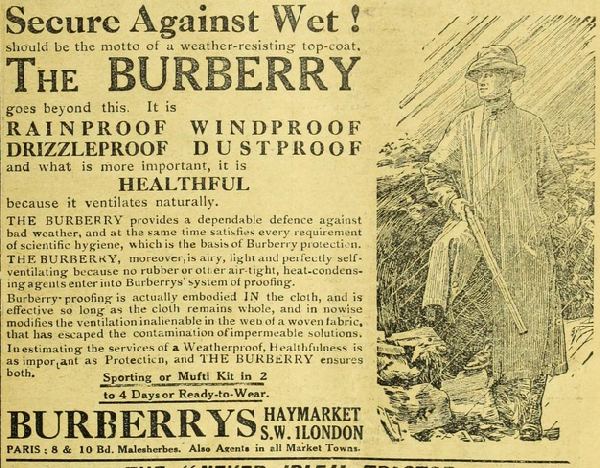 Advertisement in the Farmer and Stockbreeder magazine 1889.
Image courtesy of the University of Illinois Urbana-Champaign on Flickr. NKCR

The story of Thomas Burberry, founder of the clothing company.

Burberry Group plc is a leading global fashion brand which now sells womenswear, menswear, non-apparel and children's wear. It is famous for its iconic trademarked check design and British heritage branding. In 2009, the company's global luxury goods market estimated retail value was over 150bn Euros. A far cry from its establishment as a Victorian outfitter's shop in Basingstoke, Hampshire.

Thomas Burberry was born in 1835 in Brockham Green, Surrey. His father was a grocer and farmer. After serving his apprenticeship at a local draper's shop, Burberry opened his own small clothing outfitters in Basingstoke in 1857. At that time Basingstoke was a small country town with a population of just over 4,500.

Burberry clearly had good business acumen identifying the needs of the local community and particularly the farmers. By 1861, the census reveals that he was employing in his shop 7 men, 3 boys and 7 females.

Burberry began to researching and experimenting with materials to produce fabrics which were weatherproof and suitable for clothing customers who enjoyed the country pursuits of fishing, hunting and riding.

His business expanded further and clearly he was making money. By the census of 1871 he is described as a "draper and manufacturer employing 70 hands". He moved to a house in Basingstoke which had 160 acres, staffed with a number of servants, and a governess to look after his six children (1881 census).

In 1880 his innovative research and design resulted in a breathable, weatherproof and tear-proof fabric called Gabardine. The material was light and ventilated, but protected the wearer from the extremes of the weather.

The company expanded with a shop opening in Haymarket, London, in 1891, and in Reading, Manchester, Liverpool, and Winchester. Burberry's products were also sold through thousands of agencies. Exports abroad began with wholesale branches being opened in Paris, New York and Buenos Aires.

Endorsements of the rich and famous for his products was always welcomed by Burberry. His products were used by Arctic and Antarctic explorers including Amundsen, Scott and Shackleton. He also marketed his products to the armed forces, and they were famously worn by Lord Kitchener and Lord Baden Powell.

Soon after, the now famous check design, the Burberry check, was trademarked and used in coat linings.