When Barbary pirates raided the coasts of Britain looking for slaves.

The patriotic song Rule Britannia proclaims "Rule, Britannia! Britannia, rule the waves; Britons never will be slaves." But contrary to the song, there was a time when some Britons had been made slaves.

During the 16th and 17th centuries, Barbary Pirates, also referred to as Turkish or Moorish Pirates, raided the English coast attacking ships and raiding towns and villages, then seizing the inhabitants to be sold off as slaves or for ransom. Some of the captives were forced to convert to Islam.

The pirates came from what is now Algiers and other ports in North Africa. They were a thorn in the side of countries and states bordering the Mediterranean, as well as reaching out on raids into the Atlantic and the English Channel. 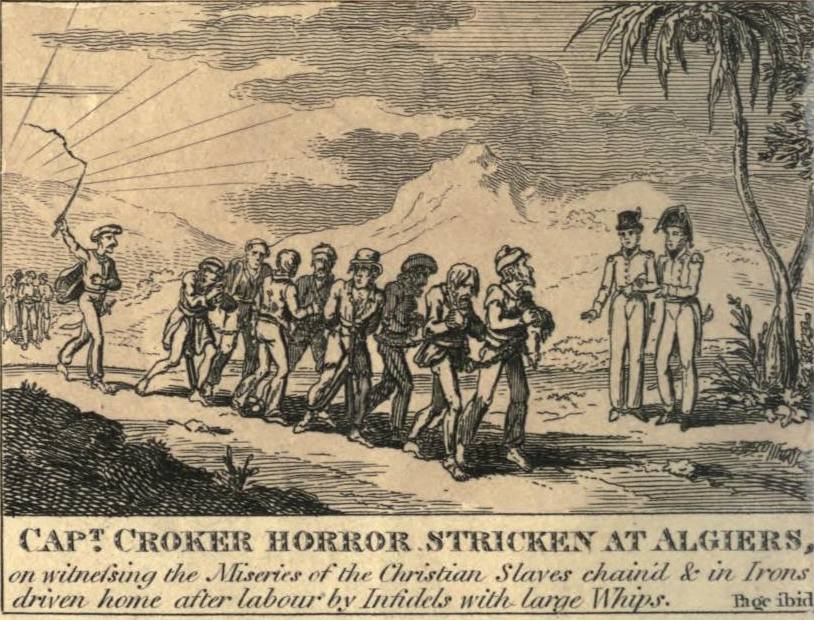 From a 1816 book 'The cruelties of the Algerine pirates, shewing the present dreadful state of the English slaves, and other Europeans, at Algiers and Tunis
Image courtesy of University of Toronto. NKCR

The earliest contact with them was in the Elizabethan period, when British explorers and merchants first ventured into the Mediterranean. They found themselves attacked and seized by the pirates who would sell the crew into slavery and demand ransoms for the merchants.

By the early 1600s merchants were regularly complaining of the activities of the pirates, and in 1624 it was reported that over 1500 were held captive by pirates. Many families had difficulty in raising the ransoms and made pleas for help in paying them. These two men had been taken when sailing through the Straits of Gibraltar.

1621
"Henry Hammon, mariner late of Gravesend, was on the Long Robert of London on a voyage to the Straits about 5 years ago when the ship was taken by Turkish pirates. He and others were carried to Tunis in Barbary where he is credibly reported to have been held ever since, in great misery. His ransom is set at £80 which the poor young man and his friends cannot raise."[1]

1623
"He was carried to Algiers and will remain there in miserable captivity unless charitable provision is made for his ransom, which is great and which he cannot pay because his adventure was lost. His wife and children are likely to starve in his absence."[2]

The pirates ventured near to the English coast and began to attack the merchant ships which had began to sail to Virginia and Newfoundland. In 1625 the Mayor of Poole wrote to the Privy Council demanding that protection be supplied for the ships returning from Newfoundland or they would be lost to the pirates. He reported that "Twenty-seven ships and 200 persons had been taken by Turkish pirates in ten days"[3]

The pirates mounted raids on the coastal towns and villages in Cornwall, Devon, Dorset, and the west coast of Ireland. Fishing vessels were particularly vulnerable.

The King and Parliament tried to organise defence for these areas and to raise money for the ransoms, but the intervening Civil War hindered any meaningful response to the problem. The periods of the Commonwealth and Restoration of Charles II saw an improved British navy and the problem of coastal raiding was stopped.

However, shipping remained vulnerable until the problem of the pirates was resolved in the Barbary Wars and the French invasion of Algiers in the 19th century.

The final number of Britons seized and lost in slavery is not known, but some estimates put it at seven to nine thousand.