The early history of British Petroleum

How British Petroleum was founded by a German company.

British Petroleum found itself widely and vociferously criticised because of its activities in the Gulf of Mexico, with 'British' used by some as a term of abuse. It is ironic that British Petroleum as a brand was originally created by a German company.

Before the First World War, oil and petrol were beginning to replace coal as the main power source for ships, and, of course, for use in cars. Anglo-American Oil supplied much of the United Kingdom market, but other companies sought to challenge them.

In 1907, Shell, a Dutch owned company, signed a contract with British Petroleum Company Limited for them to act as distribution agents of Shell products in the United Kingdom.

British Petroleum had just been established in the UK by a German company, Europäische Petroleum Union, of Bremen. The name was intended to show its operating and distribution area.

Upon the outbreak of war all three companies and their assets were seized as belonging to the enemy. As one member of Parliament put it, "there was nothing British about it".

In 1917, the Anglo-Persian Oil Company, established in 1909 and a British company principally operating in the then country of Persia, now Iran, agreed to purchase from the Public Trustee (custodian of enemy property) the three companies. The assets included "a large fleet of tank steamers, 15 ocean landing and storage installations, 535 railway tank wagons, and 1,100 motors and other road vehicles, land houses, etc., in various parts of the United Kingdom" for the sum of £2.65 million. (source: The Times 7.6.1917)

The government felt that in the interests of the war effort the organisation of the company should be retained. For the Anglo-Persian Oil Company this meant they now had a valuable distribution organisation already set up in the UK. It would take several years before any other competing company could set up a similar distribution network. 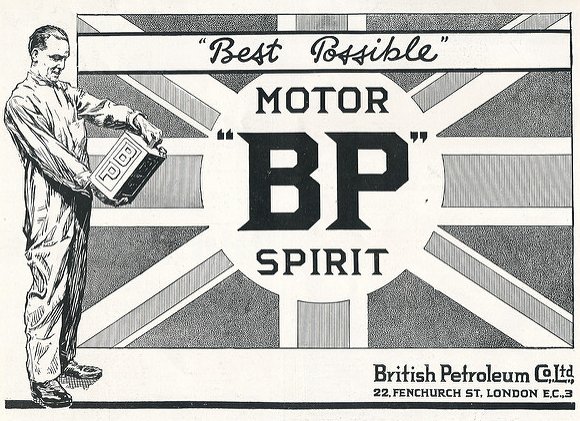 In 1921 the trade mark of the distributing company became 'BP' and their advertisements stressed the Britishness of the product: "BP is the only entirely British petrol - British in every stage from crude oil well to the familiar khaki can. British capital - British enterprise - British labour" ran the slogan in 1923.

In 1935 the holding company changed its name from Anglo-Persian Oil Company to Anglo-Iranian Oil Company, and in 1954 again changed name to British Petroleum Company Limited.