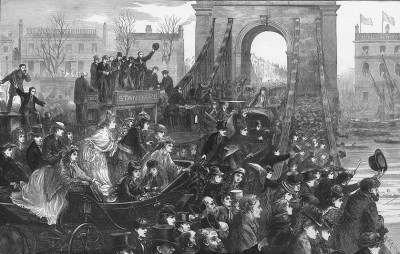 Crowds on one of the Thames' bridges ready for the boat race. Print 1872 PD.

Oxford and Cambridge meet for the first time.

The University Boat Race is now a major annual sporting event witnessed by millions of people and covered by media from across the world. The teams from the Universities of Oxford and Cambridge go to the limits of their strength and endurance as they race from Putney to Mortlake on the River Thames with crowds on both river banks cheering them on. The first boat race took place on 10 June 1829. So how did it all begin?

Out of this friendship and rivalry in rowing came the challenge to an eight man boat race between teams from the two universities. Rowing races between colleges at the universities was only a fairly recent innovation, and this was the first time that a university team was proposed.

The first race took place at Hambledon Lock, near Henley-on-Thames. (It was not moved to the present venue until 1845). The race had been much discussed and it was observed that students had deserted Oxford to go the Henley to watch the race. Cambridge students were not present in similar numbers as they had further to travel.

Local taverns and accommodation were fully booked, and the banks crowded with spectators and with boats jamming the river. One newspaper estimated between twelve and fifteen thousand watched the race.

There was some discussion on the colours to be worn by the teams. At this time there were not the university colours we know of now: light blue and dark blue, although individual colleges did have their own colours. Oxford finally decided on a dark blue (not as dark as is used now). They wore black straw hats and blue ribands, and white jerseys with broad dark-blue stripes.

It was not so easy for the Cambridge team to decide as members of the two colleges making up the team were reluctant to wear the other college's colours. A compromise was reached and light pink was chosen. It was not until 1836 that light blue was first used. The Cambridge team wore white linen shirts, with a pink necktie or sash.

The race was late starting at just before 8 in the evening. Cambridge won the toss and chose the Berkshire side which meant they had the slightly shorter distance to row. After a false start, the crews set off with Oxford pulling away and winning by two boat lengths after a race lasting about 14 minutes over a distance of just under two and half miles.

The race was followed by a hearty meal, and music and fireworks.

And what became of the originators of this race? Both became churchmen: Wordsworth became Bishop of St Andrews, and Merivale, the Dean of Ely.