The story of the first Big Ben 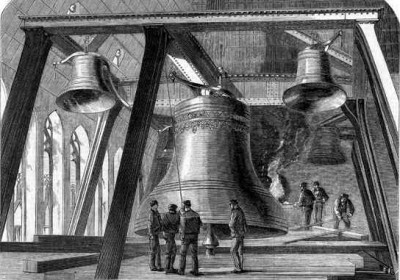 A cracking story of the famous bell.

2009 was the 150th anniversary of the famous four-faced clock in the Clock Tower of the Palace of Westminster and its Great Bell better known by its nickname 'Big Ben'. The clock started on 31 May 1859, but the bell did not first strike in the tower until the 11 July. However, this was not the first bell known as Big Ben. So what happened to the first Big Ben?

The medieval Palace of Westminster which was used by Parliament was burnt down in 1834. It was decided to hold a compettion to find the best design for the new Parliamentary building. The competition winner, Charles Barry, was appointed architect for the entire rebuilding project.

Like most large building projects things did not go to plan. The construction of tower began in 1843, but the schedule fell behind by five years and it was not finally completed until 1859.

The design and building of the clock was also not straightforward. After many disputes and arguments it finally fell to amateur horologist, Emund Beckett Denison, M.P., to design the clock, and for Edward Dent to build it.

The first bell designed by Denison was cast by Warners of Stockton-on-Tees and transported to London by train and sea in October 1856. The journey was eventful. When the bell was being lowered into the schooner Wave (of Wisbech) for its journey down the east coast, the ropes broke and it fell into the hold of the boat. The boat had to be repaired in dock with the bell still in its hold.

The bell eventually arrived by barge at a pier near Westminster Bridge. Huge crowds lined the banks of Thames and nearby roads watching the event. After the bell was unloaded, it was drawn on a low truck across the bridge by 16 horses and deposited in the Palace Yard. It was then lifted onto a massive frame and suspended from chains where it was tested and found to be free of any crack or flaw.

The tongue (clapper) meanwhile was still being made at Houghton-le-Spring Ironworks in Durham. It arrived the following month, and on 13 November a formal testing of the bell, hammer and clapper took place in private. At 11 am the bell rang out clear, much to the relief of the designer and dignitaries present.

While waiting for the tower and clock construction to be completed, the bell was regularly tested on Saturdays at 1 pm. On 24 October 1857, the testing took place as usual and it was found the former natural E note had gone and replaced by 'a cracked and uncertain sound'. Testing stopped immediately and close examination of the bell revealed that indeed it had cracked. 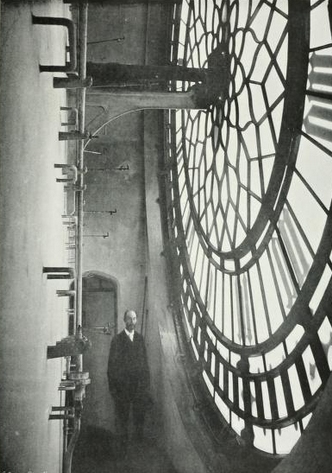 Inner view of the clock face within the Clock Tower.
Image courtesy of University of California Libraries on Flickr. NKCR.

Recriminations started immediately as to who was responsible for the crack: the designer, the founders, those looking after the bell in the Palace Yard. No one was free from criticism.

It took a week to break up the cracked bell at the newly-appointed bellfounders of Mears in Whitechapel where it was recast into the younger Big Ben. It is that bell which now sounds out across London.

As for its name, there is some suggestion on other websites that its origin is disputed, The Times, however, was quite certain of its origin:

"All bells, we believe, are christened before they begin to toll, and on this occasion it is proposed to call our king of bells "Big Ben" in honour if Sir Benjamin Hall, the President of the Board of Works, during whose tenure of office it was cast."
The Times, Wednesday, Oct 22, 1856