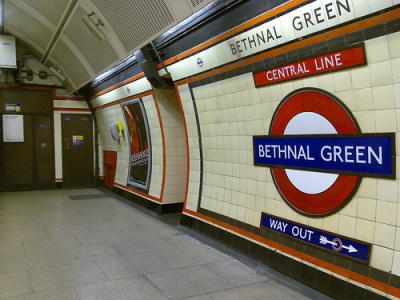 The tragic story of a crush in a tube station.

During the World War II Britain was at war with Germany and undergoing frequent bombing raids on its cities. Many Londoners sought refuge in the Underground (the Tube), the subway train service which operates under central London.

At the height of the air raids, each night thousands of people would descend down into the Underground stations and sleep on the platforms and in the tunnels, safe from the bombs dropping on the ground above them - or so they thought.

On 3 March 1943, the greatest British wartime civilian disaster occurred at Bethnal Green Underground Station in London's East End, but because of wartime censorship detailed news of the disaster was initially suppressed because of the suggestion that panic in the population may have caused it.

By 1943 the 'Blitz', the nightly bombing raids endured by the population, had diminished greatly and London was only subjected to the occasional night raid. However, as a precaution, the Underground stations were still being used each night as air raid shelters. 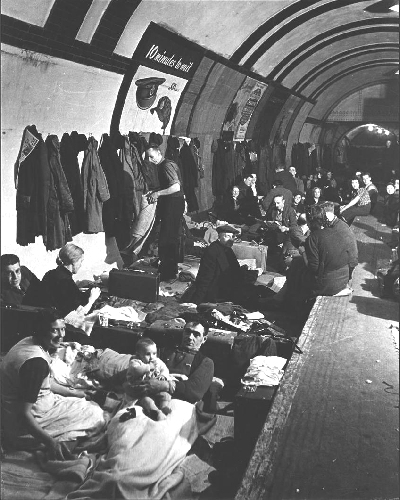 What happened next is still unclear, but it is known that a nearby anti-aircraft battery opened fire with a new type of rocket. The noise of this new weapon was unfamiliar and it was very loud. Some people though that bombs had began to fall and there was a rush to get to the station. A later inquiry estimated 300-400 people.

On the entrance steps a woman slipped and fell. Others tripped over her, and as more and more people followed them, the crowd turned into a mass of people trying to keep on their feet while crushing others beneath them. In a matter of seconds 113 adults and 60 children were crushed and asphyxiated, and 60 injured.

A Coroner's Inquest, Home Office Inquiry, and a civil case brought by a wife of one of victims, revealed that the staircase had been badly lit and constructed, and without a central hand rail. This, and the crowd losing "self-control", was found to be the cause of the tragedy.

There is now a plaque commemorating the victims on the stairs at Bethnal Green Underground Station.