The early history of Barclays Bank 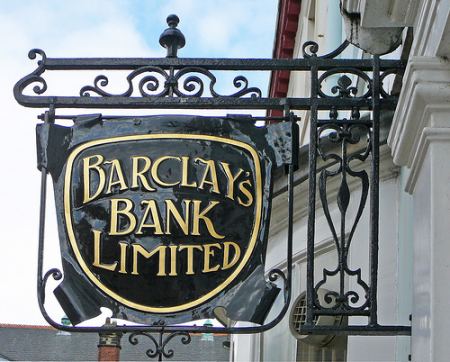 Street sign from the early days of the Barclays Bank Limited
Image courtesy of Tim Green on Flickr CC-2.0

From its founding by Quakers to a worldwide banking giant.

Barclays PLC is an international bank and financial services company with its headquarters based in London. Through the parent company and various subsidiary companies it provides financial services covering retail banking, investment and corporate banking, wealth management, and credit cards. It has more than forty eight million customers in over fifty countries. This global presence would have never been imagined by its early Quaker founders.

The foundation of its activities can be traced back to April 1690 in the City of London. John Freame and Thomas Gould, both Quakers, started a partnership as goldsmiths. At this time goldsmiths acted as bankers giving loans to merchants and businessmen for this was the very earliest stages of private banking in England.

This partnership was the start of several generations of fluctuating partners drawn from complex family relationships and careful marriages.

In 1728, John Freame's son-in-law, James Barclay, became a partner in the private bank. It is his name which is the origin of the bank's name. The partnership became known as Freame and Barclay, and later as Barclay, Bevan & Co.

Soon after the partnership moved to a new banking house in Lombard Street where several other banks were located. It was to occupy that site through the life-time of five different offices. The private bank soon become commonly referred to as just Barclay's.

By the end of the 19th century there were family connections to several other provincial private banks and it was decided to amalgamate these banks and form a limited liability company. In July 1896 Barclays and nineteen other banks joined together to form Barclay and Company Limited. It was now the one of the sixth largest banks in England.

It achieved a listing on the London Stock Exchange in 1902 and became known as Barclays Bank Limited in 1917. The bank was now firmly on the road to becoming the successful global company it is now.

In 2005 the bank's head office moved from Lombard Street to Canary Wharf.