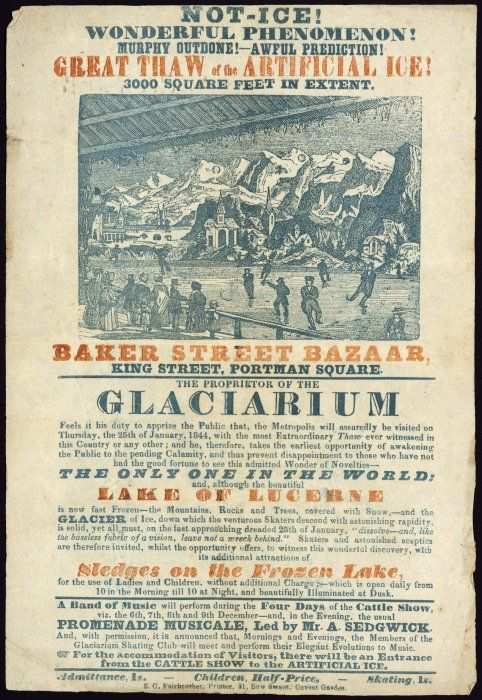 The first artificial ice rink was made in London, England, in December 1841. It was chemically produced, not made from water. The very small ice rink, 12 ft by 6 ft, was created in the most unlikeliest of places: in a seed-room in the grounds of a nursery near Dorset Square, London, and designed as a demonstration to attract investors for a much larger 'Glacarium and Frozen Lake' which would be opened to the paying public.

The two men behind this scheme were its inventor Henry Kirk who had patented his 'Substitute for Ice for Skating and Sliding Purposes', and William Bradwell, an architect.

After further demonstration at the Colosseum, Regents Park, they went onto the Baker-Street Bazaar, Portman Square. Here they created a rink with 'a surface of 3000 feet'. The rink was decorated with painted alpine scenery, and music to skate by was provided by a promenade band. Visitors included Prince Albert and Prince Alexander of the Netherlands. The rink later moved to another premises near Tottenham Court Road.

However, it was not a financial success and the novelty wore off. The surface was costly to produce and maintain, and the quality of the ice was not good enough.

It was not until May 1876 in the King's Road, Chelsea, that the world witnessed the opening of the first water based artificial ice rink: The Glaciarium. It had been tested at a gentleman's club a few months before and had raised immediate interest. Its inventor, Professor John Gamgee, had hit upon the idea while engaged in experiments on the production of refrigeration for the preservation of meat.

The process involved flooding the floor of the rink with water to a depth or 2-3 inches over flattened copper pipes. A combination of ether, glycerine and water, was then pumped through the pipes. Chemical reactions produced intense cold in the pipes which then froze the water. He went on to open two further rinks. The first was a 3000 square foot rink at the floating swimming baths on the Thames in London, and a rink at Rusholme, Manchester.

But there were problems with Gamgee's system as well. The intense cold of the ice meant skaters having to deal with a thick mist rising off the surface of the ice. Despite this, one rink using his system was opened in Southport, Manchester and it operated successfully for over ten years. However, this then closed.

It was going be several more decades before the technology of creating artificial ice for skating on would be perfected. But it was too late for those who lost their life in the greatest ice skating tragedy in Britain.