Arson in the Essex parishes 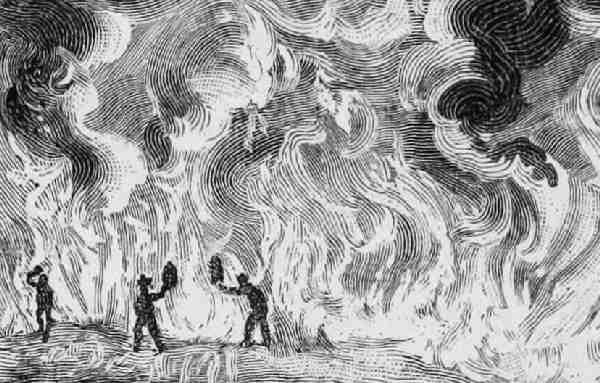 A look at a time when Essex farmers were faced with spate of arson attacks on their property.

During 1844 a series of arson attacks on hay-stacks, barley-stacks and farm buildings plagued farmers in a number of Essex parishes: Ardleigh, Aldham, Wrabness, Hadleigh, and West Mersea. Only two of the arsonists were discovered and there appeared to be no links between them. Indeed, there may have been an element of copy-cat of earlier fires set by others. For the farmers, the economic cost were high but it was reported that all the farmers were insured.

On Tuesday 29 January 1844, within an hour, three fires were ignited at Ardleigh. Fire engines from Colchester, Dedham, Manningtree were dispatched. Despite their attendance and the assistance of many local villagers, extensive damage was caused. At Off-Hand Farm: a barn and contents belonging to Daniel Cooper; at John Vince's farm: a barn, stacks and stables; finally, at Badley Hall belonging to Edward Luger: a barn, stacks and livestock.

The following Sunday (4th), at Holt Farm, Aldham, in possession of T. Hellen, a barn and sheds were destroyed despite the immediate attendance of the police who had been patrolling nearby. They had alerted the neighbouring farmers who arrived with their farm labourers and attempted to extinguish the fire. The arsonist was an animal lover however, they had released two horse prior to the fire being set.

At Wrabness the following day, at barley-stack at Wrabness Hall belonging to Mr Richardson was set fire. The report of the fire arrived at Manningtree and the inital report intimated that the hall itself was on fire. Much of the population of Manningtree went to to see the event. On their arrival it was discovered that only the stack was involved.

Police investigated and quickly identified a suspect: John Johnson, the son of a beer shop owner in the parish. He was interviewed by PC Samuel Raison and immediately admitted to the offence. He was charged and committed to the Chelmsford Assizes for his trial.

On the same day a barn and out-buildings at Pond Hall, Hadleigh, in the possession of P. Hicks, was destroyed by arson.

The following Saturday (10th) at Peet Hill, West Mersea, a straw-stack belonging to Martin Harvey, a farmer, was set fire. The burning stack then ignited two barns, a cow house, and a piggery and they quickly burnt to the ground before the fire-brigade from Colchester could arrive. The damage was valued at over over £1500 - (£75,000 in today's value)- a large sum for a farmer.

At about the same time, again at Ardleigh at Martell's Hall, a haulm wall (stems of beans and peas and potatoes and grasses collectively as used for thatching and bedding) began to burn. Prompt action by the farmer and his labourers prevented spread of the fire.

This particular series of arson in the area then suddenly stopped, although arson would remain a problem to farmers in Essex in the years to come.

Useful links: In the 1820s Witham also saw a series of fires which caused considered damage. This is discussed in great detail in Men of Bad Character: the Witham Fires of the 1820s by Janet Gyford.