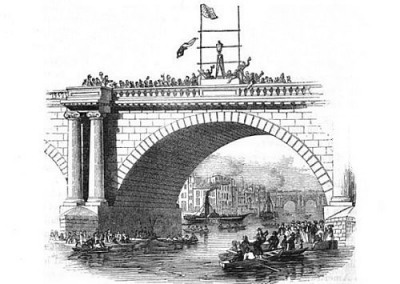 The story of a great showman who met his death in the Thames.

Samuel Gilbert Scott, b.c.1813 in Philadelphia, became famous in Britain for his daring act of high-diving and other stunts until he met his accidental death during his show.

Before his arrival in Britain he was a former sailor who worked on American and British frigates and became very adapt as a top-man working in the ship's rigging. After finishing as a sailor he earned his living by performing in the United States in Boston, New York and Philadelphia, and diving from a great height below the Niagara Falls.

It's not known how he came to Britain, whether as a sailor or as a passenger, but the first mention of him is in December 1837 when he entertained crowds in Liverpool. After generating publicity before hand by distributing hand-bills, he was watched by thousands of people when he climbed to the top-gallant-mast of a ship, carried out acrobatics, and then dived head first into the water of the docks. From such a great height, one slip could have resulted in him plummeting to his death on the ship's deck.

He dived again that day, and on a subsequent day. Assistants went among the crowds with collecting tins seeking donations. Not all agreed with his activities, one newspaper wrote with some foresight, "Foolhardy and totally useless display... If Scott intends to make many similar exhibitions, we venture to predict that he will take one leap too much." [1]

During the following months Scott made his living by giving shows of high-diving and acrobatics throughout Britain, including dives and jumps from the Menai Bridge in North Wales; the Chain Pier, Brighton; a cliff in Cornwall; a chimney in Bury into a shallow canal; and from ships docked in Manchester, Bolton, Plymouth, Portsmouth and Gloucester. 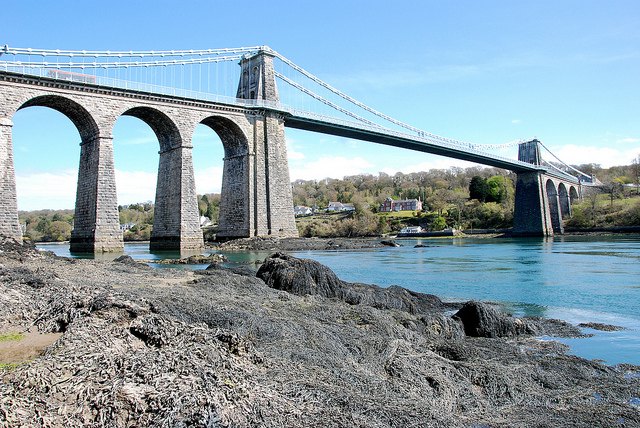 Menai Bridge in North Wales - scene of one of Samuel Gilbert Scott's jumps.
image courtesy of ton1959 on Flickr CC-BY-2.0

During the tour he added some new stunts into his show, one of which involved suspending himself with a rope round his neck.

He then arrived in Deptford, Kent. He performed there and worked his way up the Thames towards London performing before crowds of thousands at Gravesend, Purfleet, Blackwall, Customs House, Rotherhithe, and Southwark Bridge.

His final show came on 11 January 1841 when he performed on Waterloo Bridge. During the act he hung himself by a rope around his neck and remained motionless. The crowd believed that it was part of his act until it became clear something was wrong. He was taken down and found to be dead from strangulation.

His portrait can be found on the National Maritime Museum website.