My British ancestor fought and died in the First World War, where can I find their grave? 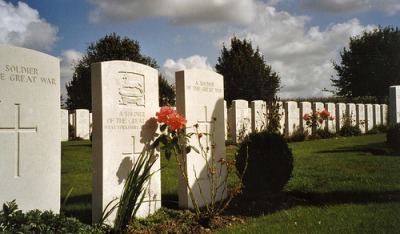 Finding one of the fallen.

Any visitor to the British and Commonwealth war cemeteries of northern France cannot fail to be moved by the spectacle of row upon row of neat, clean, white gravestones, lined up with military precision with the occasional flower growing between them, surrounded by well-cut and tendered grass.

A walk along any of the rows will bring a lump to your throat as you read the names and ages of the men who died in the two world wars; you will also notice that the names of some are known only to their God. This shows that, unfortunately, it is possible that you will never be able to find the final resting place of your ancestor, but there may be a memorial to them.

In 1915, Sir Fabian Ware was working with the British Red Cross and began to record the location of war graves of British and Commonwealth soldiers so that their resting place would not be forgotten or lost in the carnage of the trench warfare. His work became officially recognised by the British Government and his unit was transferred to the army and he was appointed head of the Graves Registration Commission. This became officially established by Royal Charter on 21st May 1917 as the Imperial War Graves Commission. In 1960 it became known as the Commonwealth War Graves Commission CWGC. 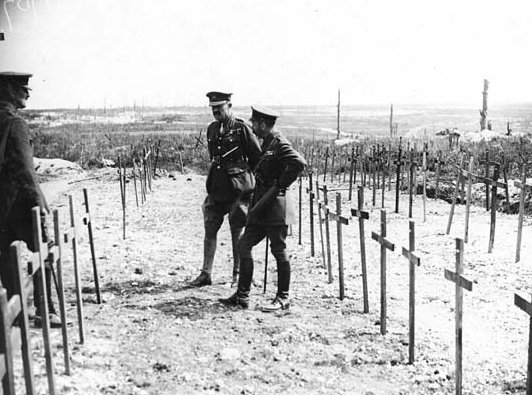 King George V viewing graves on the Western Front 1918. It would be several years before the CWGC replaced the wooden crosses.
Image courtesy of the National Library of Scotland on Flickr NKCR

The GWGC was established on these principles:

The CWGC now maintains a database of information from 23,000 cemeteries, with details of the graves and memorials of almost 1.7 million Commonwealth servicemen and women who died in the two world wars.

Before you search the database it will be useful to have as much information on your ancestor as possible, especially any number, regiment or unit, and rank, for with common names there may be thousands of matches.

If you have any difficulty with searching the database refer to the 'Common Question' page for further advice.