Did 221b Baker Street exist? 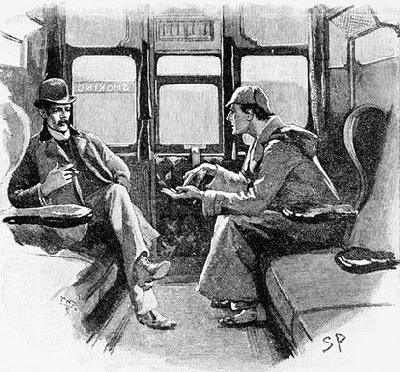 The home of Sherlock Holmes.

The Sherlock Holmes's novels remain a firm favourite despite them being over 100 years old. Film and televesion adaptations are being continually made. At the centre of the stories is the address of 221b Baker Street, Sherlock Holmes's address. But does this address still exist or which address was it based upon?

Fans and aficionados of the Sherlock Holmes stories have debated this for many years and proposed many suggestions based upon descriptions and clues in the books.

The number 221b indicates that it was a flat or apartment above number 221. Number 221 did not exist at the time the books were written, and the street was known as Upper Baker Street. When the street was renamed and renumbered, 221 became the offices of the Abbey National Building Society.

An Ordnance Survey Map of the area alongside a present day map can be seen on the National Library of Scotland mapping website.

Many fans, authors and amateur detective have scoured the books and walked the streets and alleys trying to confirm the description given in The Empty House, the story which followed the adventures of Holmes three years after his supposed death at the hands of Moriarty. Holmes and Watson walked through the streets of London to a property where Holmes asked,

"Do you know where we are?" he whispered.
"Surely that is Baker Street," I answered, staring through the dim window.
"Exactly. We are in Camden House, which stands opposite to our own old quarters."
The Empty House

Camden House was a real address, but because the change of street names from York Street to Baker Street and house renumbering, it is hotly contested as to which number was opposite Camden House. Also the directions to get to the property contradict.

Others have suggested many different houses in Baker Street, but most agree that the house was on the west side, even though Watson's description of the direction of the sunlight in one story that contradicts this. Some have argued against certain locations as descriptions of a journey undertaken in a cab would be absurd as it would only be a matter of a few yards. While one author has suggested it was even Gloucester Place.

However, none exactly fit the description, and whether Doyle had a particular house in mind remains unsolved - unlike most of his problems.